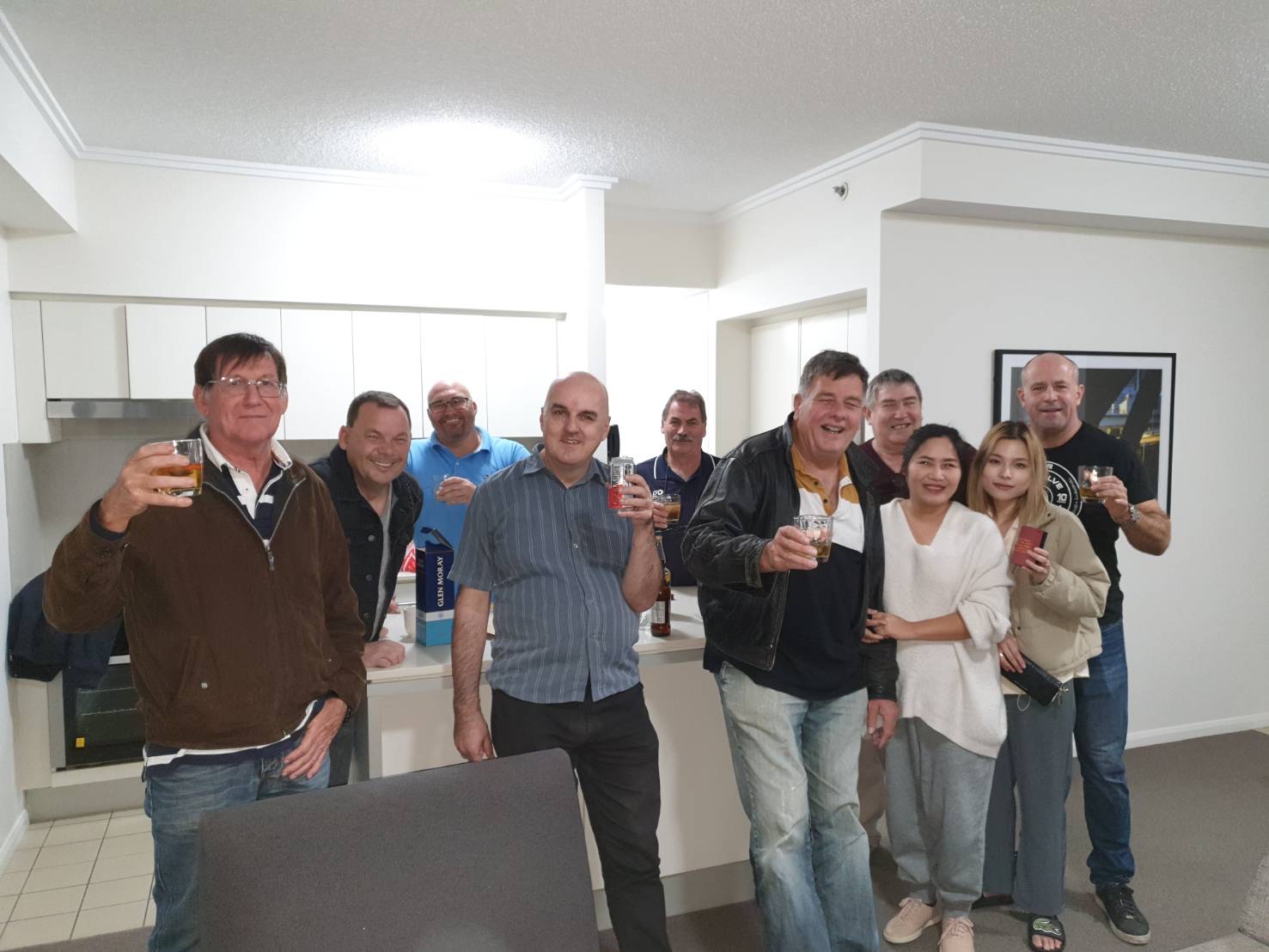 SCM unleashed on Brisbane for the night...

Ahem, last Fridays meetup of the SCM started innocently enough with Member – Thai2Try and myself driving up the M1 to meet with some of the other members at our nominated Hotel, Oaks on Margaret St in Brisbane. The timing was good as we met up with Deano4598 & Magnum PI who made the effort to come from Sydney on a ahem…business trip in the lobby and were shown to our rooms. Only Froddo & 1500b had announced that they would not be attending. Unsurprisingly T2T announced that he had forgotten to bring the 2 bottles of top grade whisky that he boasted about earlier in this thread. (Well at least he didn’t drop them this time). Fortunately there was a Bottle-O located below the hotel and the necessary Single Malts were purchased along with beers and other drinks and placed in the room. Eventually after much herding and prodding from Deano we were bundled into an Uber heading to the Craft Beer Bar near Chez Boingo for the afternoon session. We were greeted by Mr & Mrs Boingo at the bar and who should be hiding in the corner but that sly old rascal Froddo who had made a sneaky trip down to join the party. Excellent!

During the afternoon many beers and ciders were downed with Mrs Boingo (Sister) keeping pace with the boys. Then it was back to Chez Boingo for a quick bottle of single Malt then eventually it was time for the Uber back to town and by this time all present had developed a taste which would set the tone for the night ahead. Once back in room 2702 (remember that number) we found to our shock that 1500B had also made a sly trip north to join us which was great news. We were then joined by Kramer_456 and his glamorous partner BiGF who should be well known to all that follow his thread and the party was starting to rock. In no time at all Mr Wombat and Ms Wombat (A potential member if ever there was one) as well as Dawg73 & Mognam who for once had brought money and ID. At this point the drinks were flowing rather freely and everyone was in the zone.

The Sugar Cane Mafia was back in town…..

Just as things were going swimmingly Boingo (who to be fair, had put in some big work hours recently) stopped faster than the Titans did after half time in last Sundays game and had a vacant lost look on his face pretty much the same look that Kevvie Walters and Nathan Buckley have had at post match interviews all season and it was decided that he should retire and Uber home, fortunately he had some good mates and an understanding if not somewhat disappointed partner at his early demise to ensure his safe delivery home.

Right, what to do next? Drink more alcohol then think about moving on to the Cabaret Gentlemen s Club for ogling and groping…..and more drinking of course. Back into the Taxis and Ubers and into the den of debauchery known as the Valley in Brisbane. The Cabaret was a veritable smorgasbord of beautiful ladies including three gorgeous Thais and our members wasted no time in re distributing the wealth a la Pattaya GoGo’s. Mognam & Dawgy must have set a record for the amount of times they climbed the stairs to the private rooms upstairs and were obviously enjoying themselves whilst Wombat had settled for the big assed Gambian chick with the cutest face there. T2T planted himself firmly stage side eyes and mouth wide open. I personally felt obliged to check the three Thais courtesy of Wombat & 15oob and can report that although gorgeous only one of the three was willing to put some effort into it as the other two were very stand offish, similar odds to a Patts Gogo girl in my opinion. Deano however was still trying to get his head around the fact that in Australia you cannot lick the girls out on stage and needed to be restrain himself on occasions.

BiGF was playing it cool in her usual role of Talent Appraiser and Quality Control of our group and chose her marks carefully with an eye for the future. Meanwhile her partner in crime Kramerhad a roving commission checking all and sundry on stage. Up to this point all was going smoothly when Wombat & Mognam seemed to disappear and some of us decided to return to the hotel while Kramer, T2T, BiGF & Deano kicked on in town.

Fast forward to next morning, Jebb, MagnumPI, BiGF & Kramer were supposed to be in room 2702 but upon rising for breakfast T2T was also asleep on the couch having been locked out of his room then the hotel and staying on the street and pissing in the bushes before getting back in. That was his recollection anyway. I did a stocktake of what was drank the previous night, 3 bottles of single malt, 2 bottles of port, 1 bottle of Baileys, countless beers, alco fizzy pops, Bourbon & cokes, and several bottles of a curious Korean drink at 17% bought along by BiGF.

MagnumPI & Myself went down for breakfast only to be joined later by Deano  who had that same hollow, haunted and defeated look on his face as Boingo had earlier in the night. To make it easy for our European friends it is the same look on every England Manager for the last 55 years just after they have been eliminated from a major tournament. Doubtless caused by alcohol and lack of sleep in Deano’s case. One by one the combatants from the night before staggered down to the breakfast cafe downstairs. The scene resembled the Maroons dressing room after State of Origin one with many sore heads, bruised egos and a generally tendency by all not to meet the gaze of the others. Kramer was unusually silent and reflectful whilst Wombat and Ms Wombat resumed drinking alcohol. (legends!) How the mighty had fallen. First text message came from Boingo “What the fuck happened?” Indeed….

Time for T2T & Jebb to go upstairs to collect our bag and check out (cue dramatic music). We approached the front desk with the gorgeous smiling Asian girl standing behind it.

Her eyes narrowed and the smile disappeared quicker than one of Wombat’s breakfast bourbons.

T2T: Double gulp. (The room was in his name and his credit card).

Her: (With a flourish produces her phone with a picture) Do you know this man? (Her eyes narrowed even further and her mouth had a cruel curl to it. The picture showed a nude man in a lift. One of our group)

At this point we both remembered our blood oath and vow of silence or Omerta when you join the SCM whereby you never rat out on a brother.

Us together: Never seen him before in our lives but it looks like Wombat (It wasn’t.). Can we have a copy and see if we can find out who it is? (Trying unsuccessfully to divert attention and potentially blackmail but she was having none of it.. )

Me: Oh dear….But surely this happens where people exit via the door of the room thinking it was a toilet and they lock themselves out?

Her: (mouth taking a crueler twist and smelling blood now) Yes but pissing three times in the corridor and lift means that a clean up fee will be applied to the room.

At this point T2T who would have to explain the clean up charge on the credit card to Mrs T2T looked downwards shuffled his feet and said sorry as did I. But I was reminded of an incident involving a former Prime Minister of Australia who found himself in a similar situation in a hotel in America which made me feel slightly better.

Unfortunately Omerta and the blood oath from SCM prohibits me from naming the individual involved but on the long painful drive back home down the M1 I could not get the Seinfield theme music out of my head.

Thanks everyone involved it was a great night.